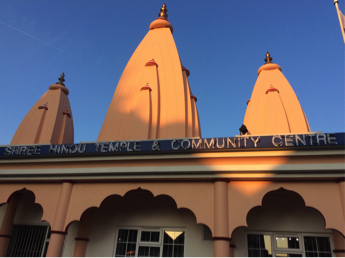 bas Road in the North Evington area of Leicester in a building that used to house a British Telecom exchange workshop. It was purchased by members of the Gujarati community for £180,0000 in 1996.[1] When the property came up on the market, the community had looked at around 15 different buildings in the city and had spent a large sum of money on solicitors’ fees, search fees, surveys and applying for planning permission.

Prior to this, the temple had been located at number 47 Cromford Street, in the Highfields area of the city, established in 1969 in a former Co-operative corner shop purchased for a few thousand pounds. Money had been raised within the local community under the leadership of a female religious teacher called Shyama Devi, who arrived from India in 1968. On June 3rd 1969 the murtis of Radha and Krishna were installed by Shyama Devi and this became the first Hindu temple in Leicester. 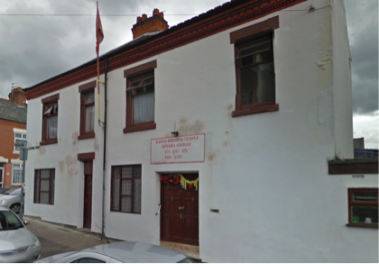 The size of the Hindu community began to grow more quickly from the early 1970s as people emigrated from East African countries following Africanisation policies in those settings. 47 Cromford Street provided the first contact with other Hindus for many of these newly arriving migrants. Indeed Leicester was attractive for the very reason that it had a Hindu temple, whereas London had yet to have one.

By 1989 the Cromford Street property was handed over to Shyama Devi and another property was sought. Shayama Devi continued to operate a temple from Cromford Street and in 1977 a second temple was opened in a vacant shop in Balham High Street, South London, and more recently a second shop there was converted to become part of the temple.

It was not until 1996 that the current property on 34 St Barnabas Road was purchased and planning permission was obtained to use the property as a temple, notwithstanding some objections about parking and noise from bells. The new temple in St Barnabas Road was more suitable for a growing community, seating up to 500 people. Renovations and extensions were undertaken, including the installation of a kitchen, toilets and a committee room. In 1997 planning permission was granted to add 3 shikhara (towers) at a maximum height of 10m giving the temple its distinctive Indian aesthetic.[2] In 2013 planning permission for change of use was granted to convert an old factory at the rear of the temple into additional space for the community to use.[3]

Money was borrowed from the bank to purchase the temple in 1996 and to make necessary changes, but within 5 years it had been paid off by generous donations from the community. £100,000 alone was raised from the opening ceremony, including donations that people paid for the privilege of being the first to perform puja to the newly installed deities or the first to ring the bell at the deity’s shrine. 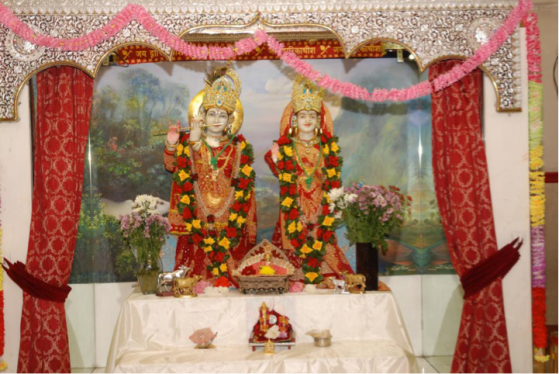 The opening ceremony of the temple, which took place over several days, also included the important prana pratishta ritual, where ‘prana [breath] means to instil life into that deity, and pratishta is to install’. It is important to note that for Hindus the ‘statues’ in the temple are not representations of the gods but are actually the deities incarnate. This explains the important role of the prana pratishta ritual and of the pujari (priest) in the temple, in attending to the deity – waking him/her up, bathing, clothing, feeding and then putting the deity to bed to rest.

The main deities in the temple are Shree Krishna and his consort Radha, but we also find other popular deities including Shree Ram, Sitaji and Laxman situated together, Shree Hanumanji (the monkey god), Shree Ganesh (the monkey god), the goddesses Shree Durga Mataji and Shree Randal Mataji and the god Shiva, as well as a display of Baliya Dev, Shitla Mataji, Jalaram Bapa, Shirdi Saibapa and Shree Vishwakarma. As our interviewee told us ‘the decision was a collective decision of the committee members of what do we want, and we wanted to provide a temple for all the different sectors of the Hindu community.’ 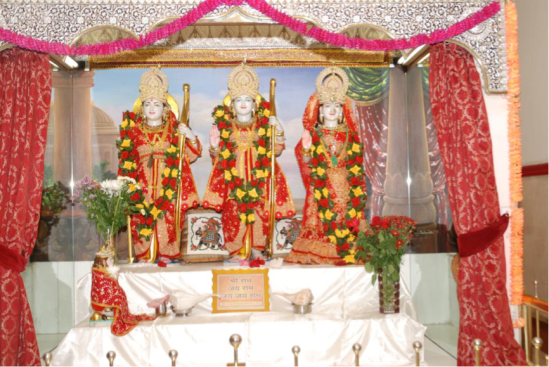 Our interviewee explained that in addition to pujas for deities,

‘a typical Hindu temple provides religious requirements, spiritual needs of the people, anything people have to do with birth, death, moving into a new house or any particular ceremony they want to hold, either in their own homes or at the temple. The priest’s job is to advise and guide them, and the committee will also be involved in that process. So that is taking care of the spiritual side of the temples goals….The other bit is to provide educational facilities, social facilities, drop-in centres, libraries and also a place where people can come and eat as well.’

The temple also runs school visits and has welcomed ‘local councillors, from MPs or government officials, including even the royal family.’